After well over two years of match reports, interviews, inside information and the odd spot of controversy, I'll be putting the MTU Blog to rest for the near future.

Don't get me wrong, I'll still be a big Muangthong fan, I'll still be tweeting and I might produce the odd article, but with Nonthaburi FC being nominated as a nursery club for MTU this year, and so much information on Muangthong now freely available in English (not the case when I first started blogging), I figure it's time to focus on the smaller of my local clubs.

Get over to Ben's here for regular MTU match reports and updates.

Thanks for your support.
Posted by Greg at 17:39 No comments:

The transfer mill is turning fast at MTU. Out is striker Ri -Myong-Jun - not to be confused with fellow DPR and MTU player, defender Ri Kwang-Chon. Ri was already on loan at Port last season. He goes on 'loan' to Thai Port (now Port Lions FC) for one season. His move makes way for countryman (politics aside, he's actually South Korean) Kim Yoo-Jin, a  29 year old defender who has plied his trade in China and his homeland.


Photo credits:
http://bigstory.ap.org/
smmonline.net
Posted by Greg at 20:39 No comments: 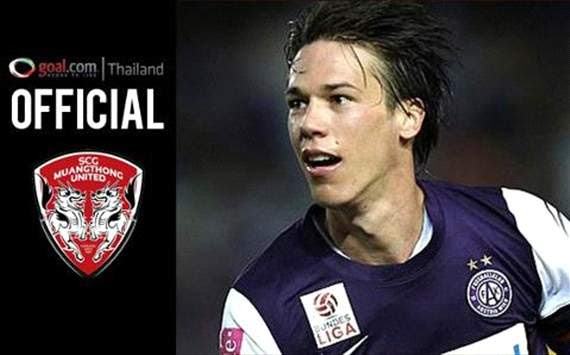 Austrian international Roland Linz has put pen to paper to sign a two year deal with the Quilins. The striker has been capped almost forty times by his country and has netted eight goals.

This may well mark the departure of Teerasil or one of MTU's other foreign strikers (Paulo?) but time will tell. More details to follow. For now, welcome Linz!

Lots of coverage of Teerasil’s arrival, reception and welcome at Athletico has circulated in Thailand as the brilliant striker embarks on his Spanish adventure. It’s notable that Muangthong have already rebutted suggestions that the move is a “publicity stunt”.

Time will tell if this is the case, but it’s hard not to be cynical. One the one hand, it’s notable that MU are already being linked with other relatively high profile signings and like any Quilins fan, I rate Teerasil hugely and I know he’s capable of playing against top sides. But then, I also know how MTU and Thai clubs operate in general. I remember the club circulating pictures of  Pires, Del Piero and others, when - as history shows - contract talks were preliminary if they existed atall. It’s simply a hype game. This is in contrast to the tactic of bigger UK clubs who often use the media to unsettle/attract a player they genuinely wish to sign.

It’s not outrageous to suggest this latest trial is in the interests of swelling the striker’s value. But even if this is the case, let’s hope the European trip provides more benefits than the Manchester City debacle. A club like Athletico could provide top notch training and experience to Mui, whatever the final outcome.

Email ThisBlogThis!Share to TwitterShare to FacebookShare to Pinterest
Labels: teerasil

A very predictable game saw European giants PSV dominate possession but Muangthong held their own against the big boys and came close with a first half effort that went the wrong inch side of the post. Both sides used plenty of substitutes with everyone from reserve keeper Yaodam to Ali Diarra getting a look in for the home side.

The crowd thoroughly enjoyed the game and with at least two big signings expected to be confirmed this week, things are looking good.

Tomorrow’s game has certainly caught the imagination of Thai fans. AS of Saturday, just 3,000 tickets remained. That number is now down to less than one thousand. Dutch and other international press are covering the encounter.

PSV Eindhoven should need no introduction. The European giants are currently progressing well in the Champions League and have arrived in full strength except for the controversial  World Cup finalist Van Bommel.

Muangthong will field a full strength side and although the game is largely a marketing exercise, it’s still an enticing thought to see Kawin against Mataves, Mario against Marcelo and so.


PSV  training in Thailand (thanks to Matt Riley)

This unofficial blog is intended to introduce the Thai Premier League club Muangthong United. A good place to start is the essential links section right below.

A few articles require a "members password" that anyone is welcome to. Click here to read more.

There's no need to request permission to copy anything you read here. Read here for details.

I don't own most images used. I try to give credit but please contact me in case of a problem.

Muangthong the Champions - The MTU anthem

The standard of Thai football

The culture of Thai football

Nonthaburi FC blog (my other blog on the other Nonthaburi team)

Breathing Football (by Thais, in English)

This work is licensed under a Creative Commons Attribution-NonCommercial-NoDerivs 3.0 Thailand License. English version

This blog is not official, opinions expressed are not those of Muangthong United. Absolutely no warranty of any kind is provided with the information supplied in this blog.